Freshkills Park is already a prime example of Dark Ecology but upon its final completion the scales of that land’s existence will reset anew. The former landfill which sat upon stolen land of the Lenape people will be buried and forever out of sight. This resetting calls for an ecological awareness that is necessary to hold onto the park’s historical layers.

As Timothy Morton has said “ecological awareness forces us to think and feel at multiple scales, scales that disorient normative concepts.” Looking at Freshkills park as an entanglement of multiple histories existing on more than one scale allows that “dark-sweet” sensation to envelop the viewer.

“This uncanny sense of existing on more than one scale at once has nothing to do with the pathos of cradling a beautiful blue ball in the void.” - Timothy Morton

This is the first post in a series about lesser known places in NYC that have unusual and strange histories that have largely affected their present states. the series is titled: Dark Ecologies of NYC 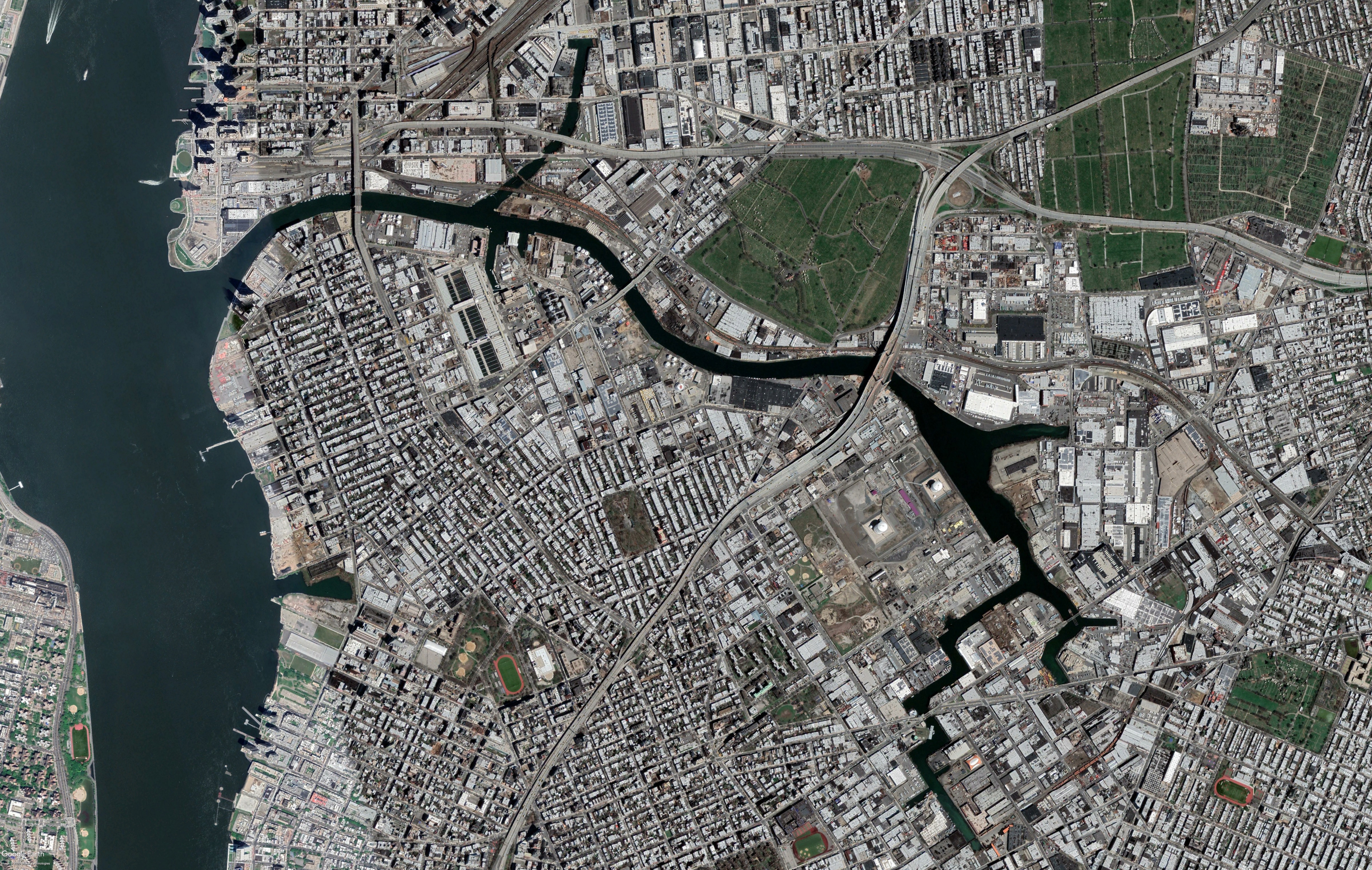 Dark Ecologies of NYC builds on the term “Dark Ecology” coined by the Scholar Timothy Morton. Dark ecology, as described by Morton, is in a sense ecological awareness, which often begins as dark and depressing. That initial darkness eventually yields to the weird and uncanny, allowing for a strange “dark-sweet” sensation to overcome the viewer. The awareness that arrives when the weirdness sets in is both a riddle and a change in mindset - How one becomes accustomed to something strange and yet that strangeness never ceases to become less strange.

Newtown Creek’s own dark ecology is situated within a history of industrialization, pollution, regional cleanup, and subsequent art, research, and community movements in the area.

Below are links to specific projects, organizations, and notable people who have documented and worked within Newtown Creek. It is not a complete list but we will work to update it to keep it as expansive as possible!

During one of our virtual sessions for ITP Camp this summer, we hosted artist and scholar Bassem Saad. Bassem’s work explores objects and economies that distribute violence, pleasure, care, and waste; in particular relevance to our organization, Bassem’s prior work has engaged with the circumstances and responses to Beirut’s waste crisis.

To prepare for this talk, Bassem asked us to read the following pieces, which informed his own thinking on this topic:

“Genealogies of Resilience” begins to unpack the history and use of the term “resilience”, which now commonly appears in civic discourse for issues ranging from coastal infrastructure to financial investment schemes. Walker and Cooper note: resilience requires us to not predict or prevent disaster, but merely adapt to its eventuality and aftermath. The article traces the lineage of this term, from its start in complex ecological systems to its present applications in security by the likes of the U.S. Department of Homeland Security, the World Bank, and the IMF. It specifically points to the scholarship of C.S. Holling, an ecologist, and Friedrich von Hayek, a philosopher, whose contributions ultimately shaped modern neoliberal strategies for regulation and crisis response. Tracing their influence through sustainable development practices in the Global South, W&C find that a logic of resilience is also “a tacit recognition that ‘development’ for the post-colonial poor now consists not in achieving first world standards of urban affluence but of surviving.” This realization crystalizes another: if resilience as espoused by second-order cybernetics cannot critique the injustice of a complex adaptive system perpetuating old modes of power, it is necessarily in collusion with its agenda.

“Hopeful Resilience” looks at the indoctrination and combination of both modern structures of resilience and technology within high-tech computational infrastructures, and “smartness” of cities and technologies. This combination creates a form of “preemptive infrastructural governance” that normalizes and “naturalizes” violence, loss of human rights, and environmental sacrifice as necessary for the economic model the world thrives under rather than a set of politically driven options set in place by a small number of individuals. The author compares West Bengal with New York City as seemingly different from each other but both containing exploitative bodies under these specific modes. The future can be seen as a financial instrument in which we recognize our codependence on each other. A new future asks for a different relationship between how we understand financialization, ecology, habitat, and environment.

The piece ties together work from scholars such as C.S. Holling, Melinda Cooper, and Randy Martin, to make the case for examining finance, environment, and habitat for future world visions.

This, of course, brings us to Bassem’s own works – the three that were most prominently featured in his talk are featured and summarized below:

“No Entropy Cassandra 2020” introduces us to the realities of the 2015 waste crisis in Beirut, Lebanon.. Bassem articulates a framework of “Entropy Cassandra” based on Tiqqun’s Cybernetic Hypothesis–systems are not pure and in fact exist in a state of insular degradation–along with a history of Beirut’s waste infrastructure, and civil unrest. He conceptualizes a (counter) theory of “resilience” to both imagine and examine Beirut of the present and future. He is primarily interested in two properties of a system: resilience and entropy. Entropy reveals what resilience may mask. So, we must ask: what may be the role of the artist and the protestor facing systems that privilege resilience? And what would it take to avoid becoming an Entropy Cassandra and instead to move to a “different plane” while continuing to protest and care for the most fragile within society?

“Kink Retrograde” is a 19-minute speculative film that opens with the text: “Filmed inside a landfill whose legal status is as disputable as the legal status of our bodies inside it.” The visuals dance with the themes of toxicity, life, and promise–often presented in playful juxtaposition. Bassem, in his words: “Toxicity is seen as an existential and political condition arising from governance that normalizes crisis and prescribes resilience.” His protagonists, must therefore, devise a new way of being, one that is “aware of its own abjectness, risk, and deviance — one of total kink.” An excerpt of the film is available on his website.

“Abrasive Things,” though unpublished, presents the most urgent and relevant vision of what kink can teach us about existence in a world mired in economic collapse, a global pandemic, and a perpetual carceral state. In the wake of the August explosion in the port of Beirut, Bassem’s words–“molecular violence inflicted differentially on bodies in specific geographies”–ring especially clairvoyant. He is emphatic to note that the social contract that exists between parts of the citizenry that disportionately bears the weight of systemic risk and its government is deeply broken. Risk-aware consensual kink tells us that new modes are possible, with greater vigilance to the reality of current conditions (though remaining shy of fatalism). Bassem examines the history of strategies leveraged against the constant and pervasive hum of crisis–from theological to technocratic–and notes, with alarming self-awareness, that all exits are ideological ones.

We are very grateful to have been able to host Bassem this summer, and encourage all discard studies enthusiasts to follow along with his work.

Food makes up around 20 – 30% of NYC’s waste stream. As opposed to sending that food waste to landfills, composting transforms garbage into nutrient-rich soil. Composting is the process of decomposition, in which organisms break down organic material until only the beneficial soil remains. This is a natural waste management technique that diverts food waste from the landfill, where the food would decay in the absence of oxygen, creating greenhouse gas methane.

Composting provides a way to not only reduce the amount of waste, but to also convert it into a product that is useful for gardening, landscaping, or house plants. In a sense, this process closes the loop in our food waste system.

Implementation Plan We will be putting out the compost bins during our floor’s Wednesday snack time. We will collect, weigh, and then transport the compost to a drop-off at the Borough Hall Greenmarket on Thursday. Since we will be transferring the compost bin a day after the compost is collected, we intend to freeze the food scraps in our floor’s communal freezer overnight.

Volunteer Opportunities We also plan to schedule volunteer sessions at composting sites in New York City and Brooklyn. The LES Ecology Center has Monday morning volunteer opportunities at their East River Compost Yard in which you can spend a morning sifting through food waste, chopping up scraps into small chunks, and much more hands-on fun! Red Hook Farms also runs a volunteer program for composting on weekends. From these service events, we hope to get a first-hand experience at how our food scraps are transformed into soil.

Resources for Composting in NYC